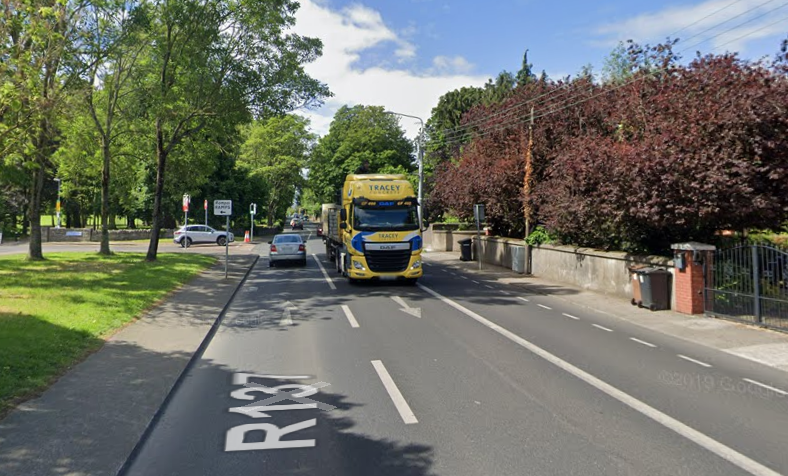 The Tallaght to Terenure route has improved but still too often cyclists are diverted on rat-runs to facilitate general traffic flow. Direct beeline cycling infrastructure on primary corridors is important to maximize cycling uptake for commuters and reduce overall car dependency. Below are some existing concerns and our proposed solutions. 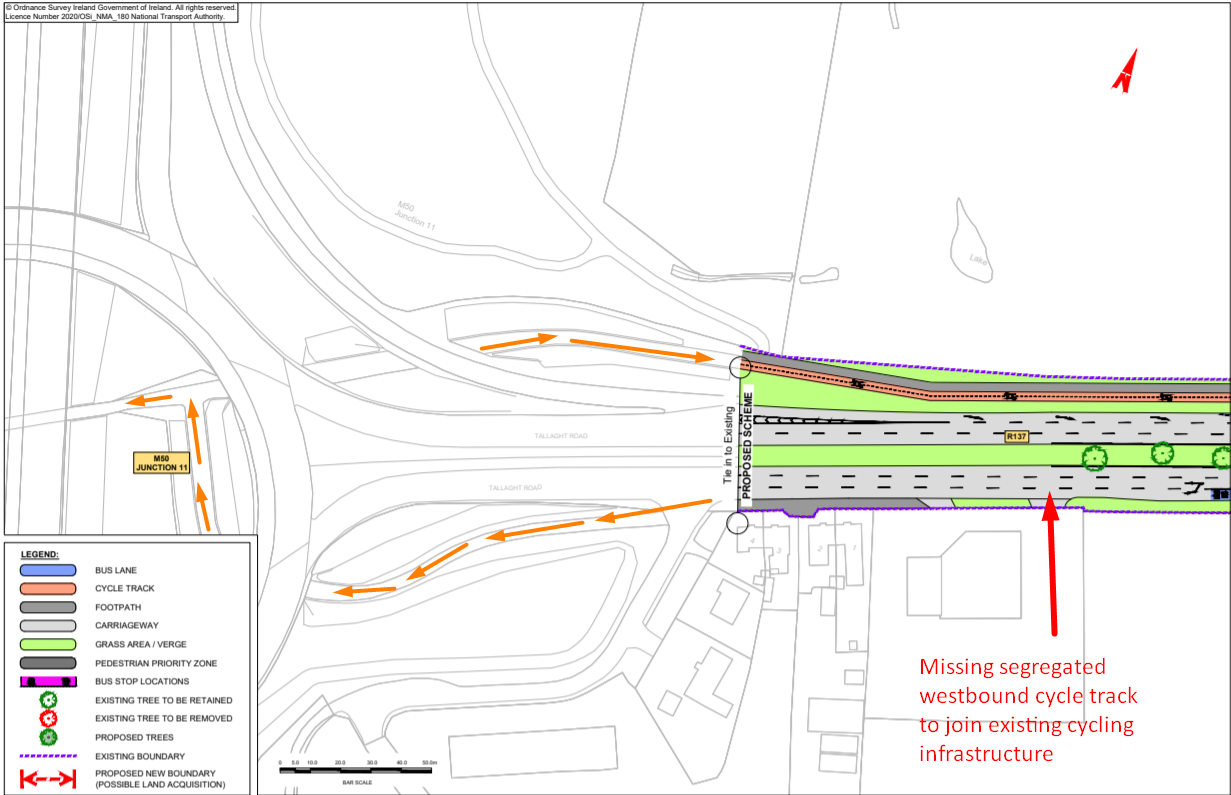 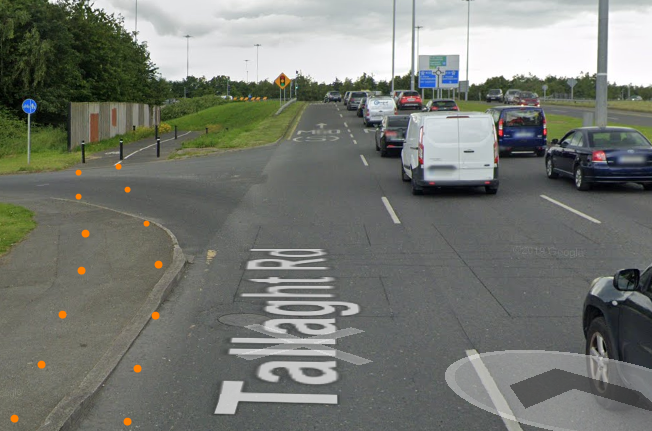 A) M50 cycle tunnel: Cyclists cycling toward Tallaght/CityWest from Templeogue,Knocklyon,Rathfarnham areas need a segregated cycle track on the outbound side of the road for route continuity and to prevent them having to cross a busy dual-carriageway. In this first image you can see an already existing westbound cycle track which runs under the M50 but remains completely cut-off from cyclists under the new plans despite the fact that there is ample free space to provide for it without any road widening. The existing speed-limit for this section of road is 60km/ph and we would expect this cycle track to naturally be completely segregated from the main road safety reasons. 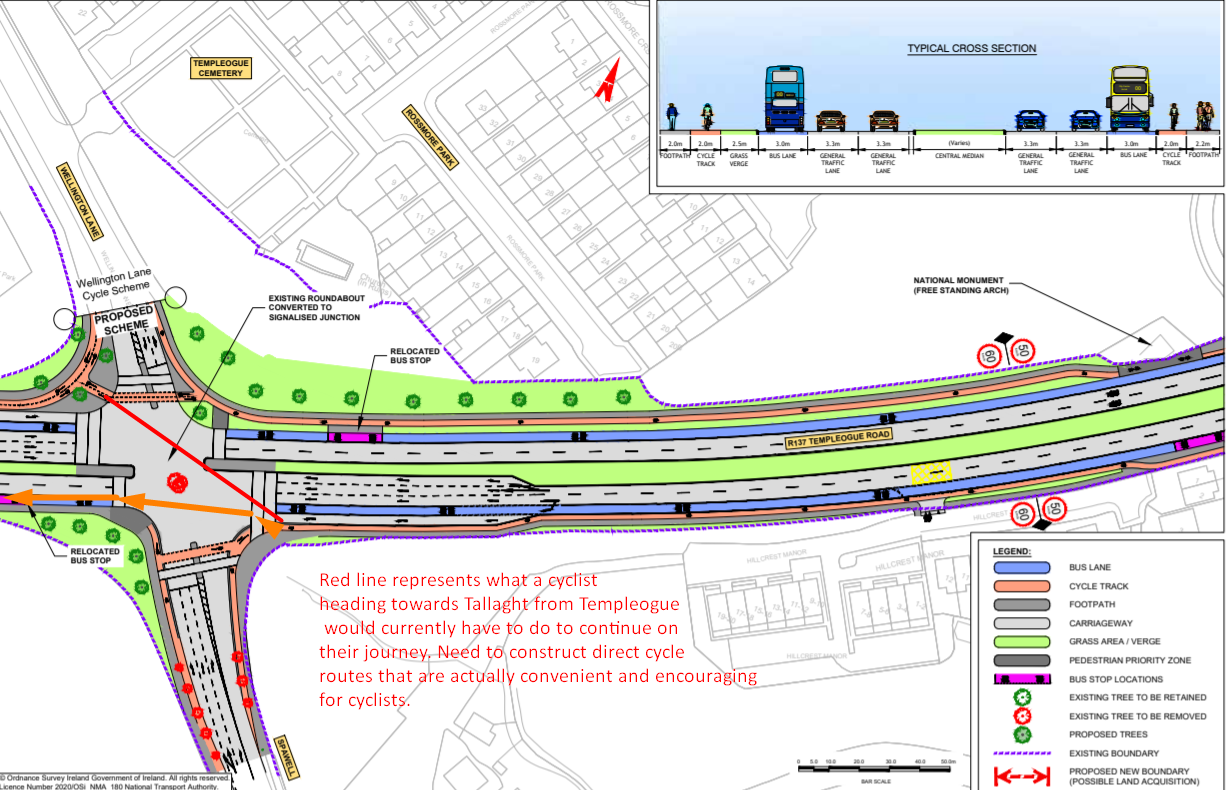 The continuity problem is further illustrated here as you can see the outbound cycle track suddenly ends at Spawell intersection. The red line shows the approx 8 lanes of traffic that the outbound cyclist coming from the city or Knocklyon would have to cross in order to continue on their journey to Tallaght/Citywest. 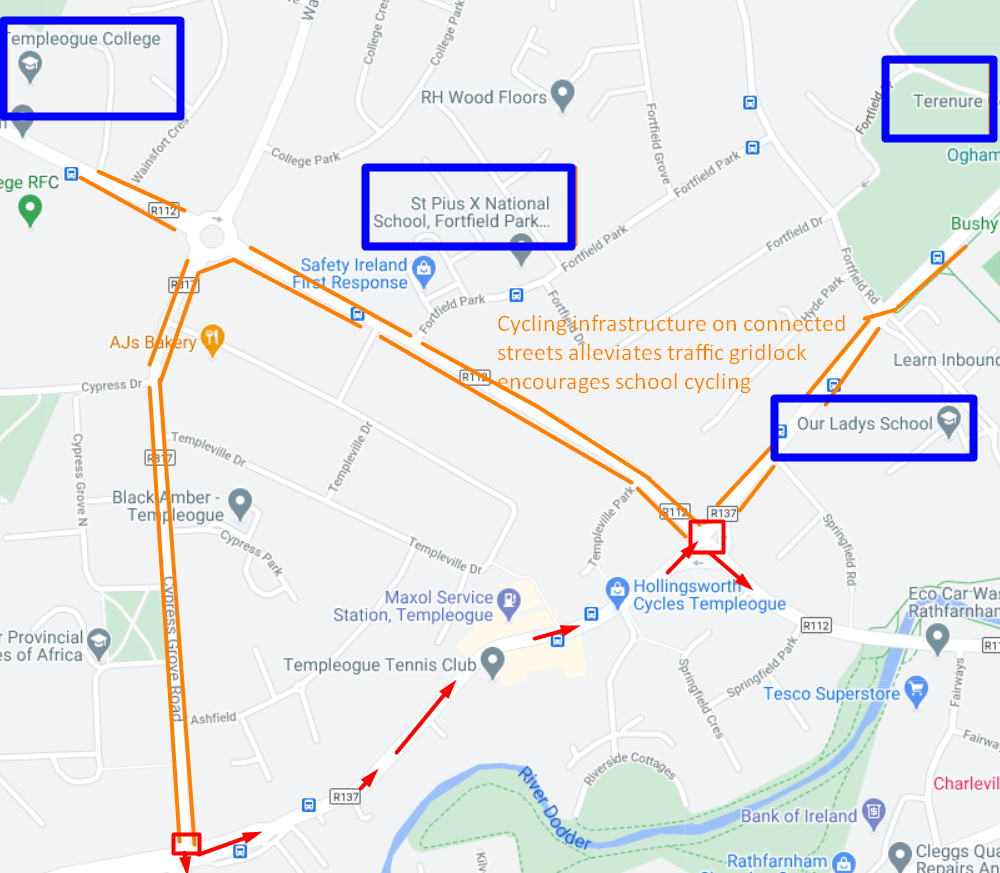 B) Traffic Spillover: This image illustrates a potential concern for residents of Cypress Grove Road that inbound traffic will be re-routed in their direction. Whilst the Bus-Gates in both Harolds Cross and Terenure should help alleviate this, segregated cycle lanes on Cypress Grove Road and Templeville Road would further help to reduce traffic spillover and bring residents onboard by providing much needed cycling infrastructure for the four schools in the vicinity. The existing cycle track on Cypress Grove Road is of poor quality as it does not travel in a beeline path alongside general traffic.
C) Park and Ride facilities: Furthermore, inbound motorists coming from M50/Tallaght should be provided with Park & Ride facilities to encourage public transport uptake for motorists, providing a real alternative for drivers. These could potentially be provided at a location such as the Spawell Carpark, the carpark opposite Cheeverstown House and/or the carpark next to The Morgue Pub or petrol station in Templeogue Village. As part of the network overhaul, there was also an opportunity missed to provide for an S5 orbital route along the R112 pictured, which would have intersected with several of the proposed spines and provided a key transport link between many suburbs and several popular destinations such as Dundrum Town Centre, UCD and Dun Laoighaire, facilitating a more integrated and comprehensive transport network for the area. Further details of this can be sent to you in another submission should you be interested.

D) Village Cycling Diverting cyclists inbound cyclists through Rathdown is feasible for leisurely cycling but not the commuting cyclist who is unlikely to follow this route. We suggest utilizing the toucan crossing at Rathdown Crescent to allow city-bound cyclists to rejoin the Templeogue Road continuing on the most direct route to the village as they currently do. The existing min-width on street cycle track only needs to be maintained and partially supported with protective orcas/bollards as according to best international evidence buses and cyclists can mix in 30 km/h areas and those that prefer a quieter less direct route can still opt for the Rathdown path. See: European Union Cycling Best Practice Document. The plans have already provisioned for a 30km speed limit and inbound bus-gate limiting general traffic which would help ensure safer cycling here.
For outbound cyclists, we see there is a cycle track provided the crossroads but there is no way for cyclists to get to it (see pic below). There are no plans in your document to improve this dangerous outbound section for cyclists and make use of available path space outside of these shops, the first of which is actually a new bike shop.

To summarize: We would like to see:
A) An outbound cycle track between Spawell and M50 in addition to the existing one on Spawell side
B) Dedicated cycle tracks for Templeville Road and Cypress Grove Road to reduce spillover
C) Park and Ride facilities between M50 and Templeogue Bridge to reduce traffic spillover
D) Addition of outbound cycling infrastructure at Rathdown Motors intersection.

Prioritizing public transport over private vehicle usage on the transport corridors means prioritizing continuous beeline cycling infrastructure as well as the priority bus lanes in order to reduce car usage at peak times as much as possible. The changes suggested above are aimed at making cycling more attractive to help maximize commuter uptake and contribute to the stated goals of the Bus Connects project without compromising any of the current objectives. 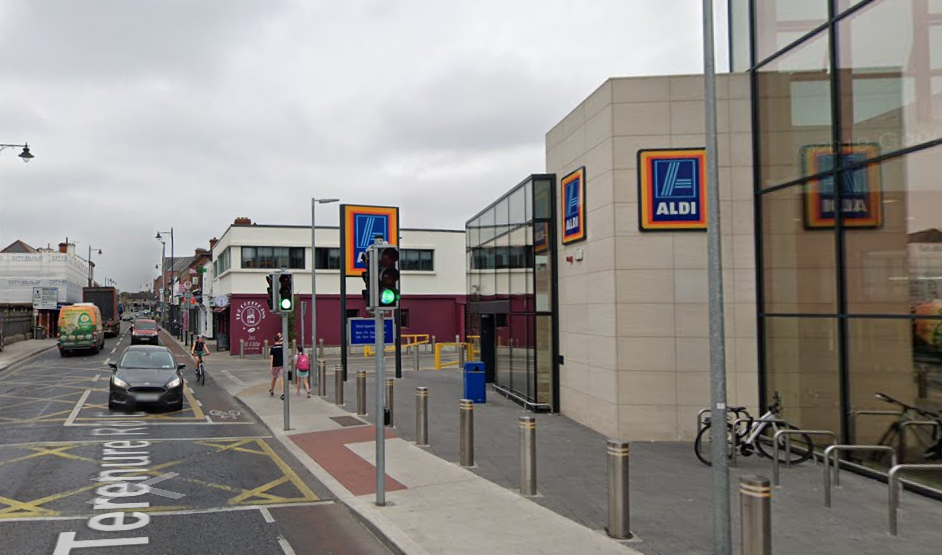 The Rathfarnham to City Centre route has improved in some ways and disimproved in others. The solution found for Rathgar Road was in our view a very good one as a good compromise was found here to prioritize public transport including cycling infrastructure. However Terenure Road East continues to be a source of concern and the decision to remove existing cycling infrastructure in order to maintain a segregated bus and traffic lane in each direction illustrates a lack of oversight on how to best reduce traffic volumes on limited roadspace.


We disagree with the removal of the existing narrow cycle track on Terenure Road East in order to maintain a continuous bus lane throughout. Whilst we understand that there are particular width constraints on this section of road, when you are less than 5km from the city on a thoroughfare that connects with the busiest cycle route in the country, cycling actually takes precedence over maintenance of separate general traffic and bus lanes not least because it serves to remove more vehicles from the route. Our Suggestion: Add a segregated inbound cycle track from Aldi to Rathgar Village. Remove the planned new inbound bus lane and keep bus and general traffic mixed until Brighton Road junction. Keep the planned outbound configuration but with added outbound cycle track until St Josephs Church.
Our Reasoning: The aggregated affect of the inbound Bus Gate on Templeogue Road and Rathmines Road with priority signalling throughout will help with traffic calming along this short stretch and upgrade of the existsing min-width cycle lanes to segregated tracks is the best way to further reduce the volume of general traffic on this route because commuting cyclists to schools, villages and jobs take cars off the road.

Two lanes will become four but no room for the cyclist
Lets look at the issue from the point of view of key stakeholders.

Residents: Residents who are already concerned with land-take from their private gardens would rather have a cycle track encroaching on them than a high frequency bus lane which should be kept towards the middle of road. Concerned with a "highway corridor" effect, the plan to widen the road only to add more vehicles and remove bikes makes this idea a difficult sell in calming their understandable concerns.
Business: Businesses in the village want cyclists to have access as it means more footfall for them. Even newer tenants such as Aldi and Lidl have even gone as far as installing cycle racks outside their store, recognition by them of what is a growing market for those who want to make more frequent smaller trips to the supermarket.
Families: Parents want their kids to be able to cycle to school for obvious reasons. Students of St Josephs primary school and Presentation secondary also deserve safe access to their school by bike and providing for this would remove much of the peak hour traffic with which the buses are currently competing.
Cyclists: As mentioned previously, directness is important to cyclists and sidelining cycling to a rat-run on neighbouring streets goes against best international evidence on a key artery just 5km from the city centre. Keeping inbound cyclists on the most direct in the morning is likely to encourage greater uptake whilst making greater use of neighbouring streets for the outbound cycle is unlikely to deter them since they are likely on the way home.
Not withstanding this, we understand the space constraints that currently exist in Terenure Village for example. Our solution to the space constraint is the following:

For this section between the village intersection and St Josephs Church, we propose the removal of the outbound cycle lane only, with outbound cyclists being directed either via St Josephs and Beechlawn Way or onto Greenmount Road. This would allow cyclists to cycle much closer to Terenure village allowing access to St Josephs school and the village whilst the narrow village footpath on the St Josephs side of Terenure Village can still be widenend as per the current plan creating a better civic space.

To summarize: Converting Terenure Road East from a two to a four lane corridor for vehicles is an extreme solution to a space problem, particularly when it removes key cycling infrastructure. It is once again important to remember the number 1 priority here: removing private vehicles from the road on a shared roadspace to allow for more people to get more places. Widening the road to four traffic lanes makes little sense particularly when it results in a loss of cycling facilities and greater convenience for general traffic, contributing to the much despised "highway" effect on our streetscapes. To this measure, we believe our three lane plus cycle facilities proposal fulfills the improved mobility objective to a much greater extent than the current Bus Connects plan. The marginal benefit of a segregated inbound bus and general traffic lane on this stretch of road is outdated and simply not worth the cost to residents, the streetscape, cyclists and the community as a whole. 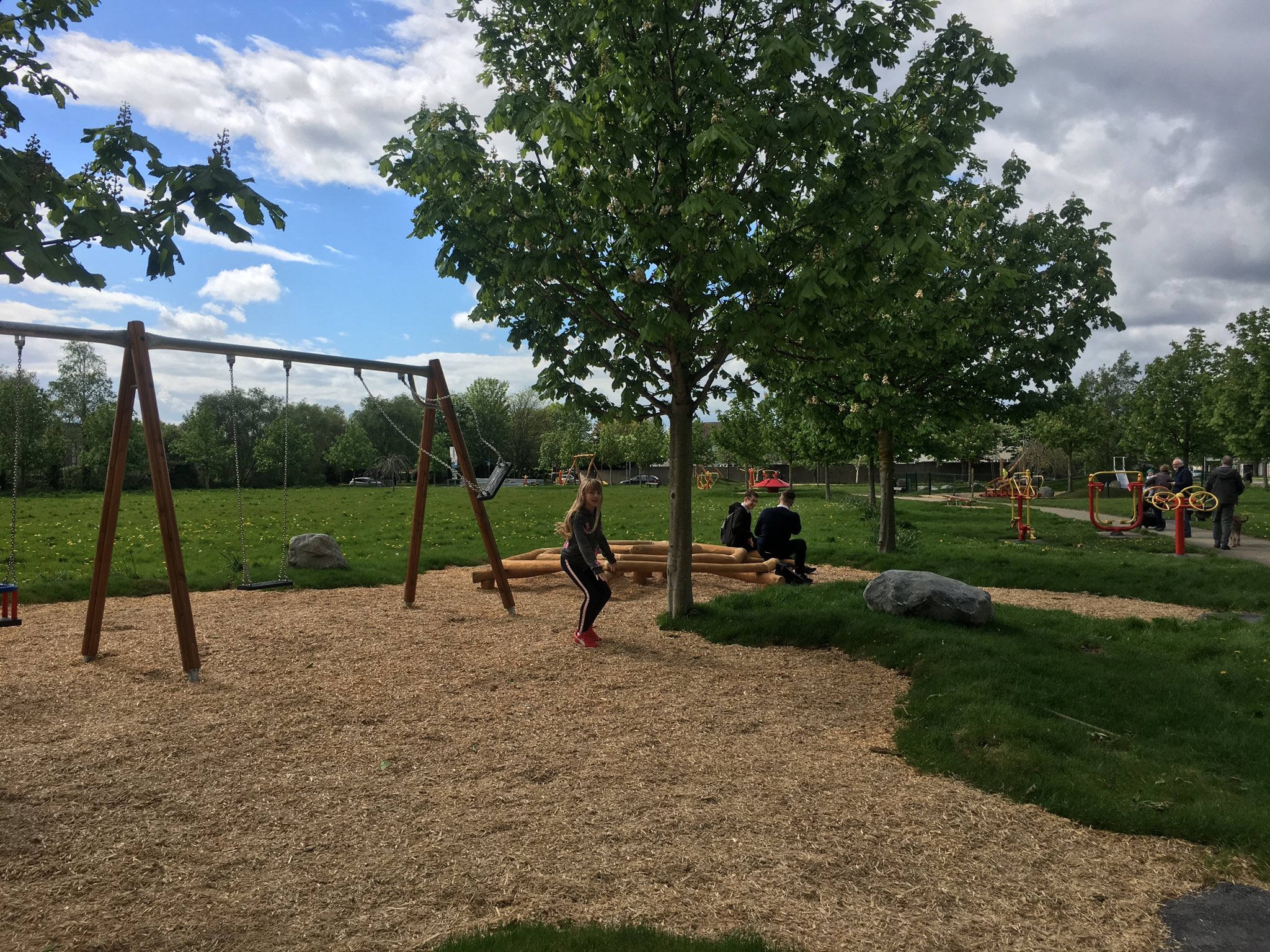 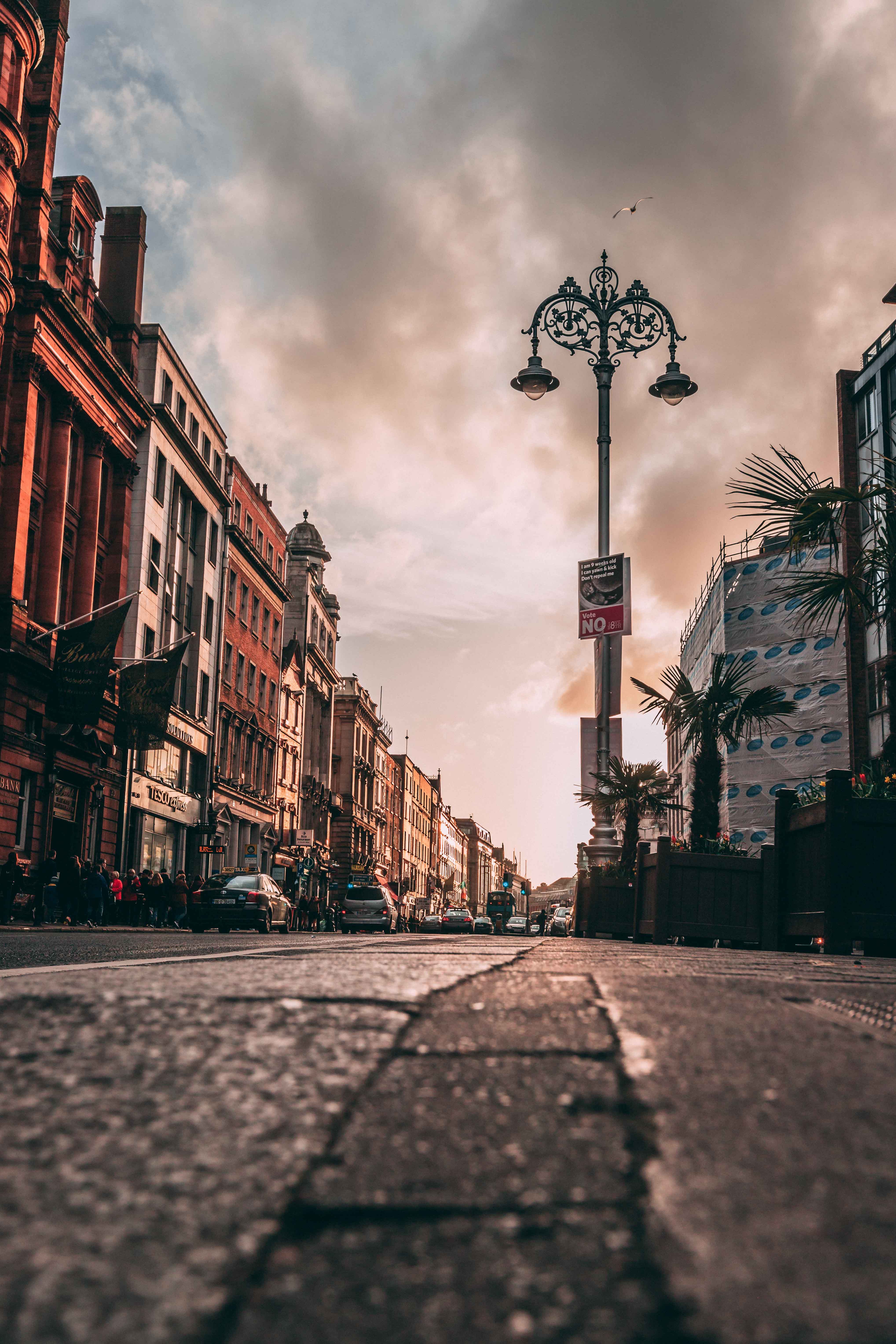 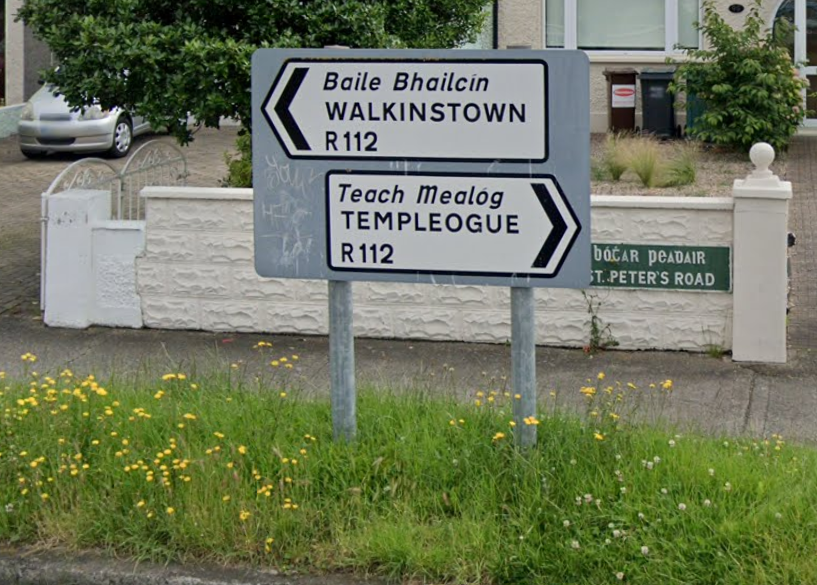 THE OVERLOOKED ORBITAL FROM BUS CONNECTS 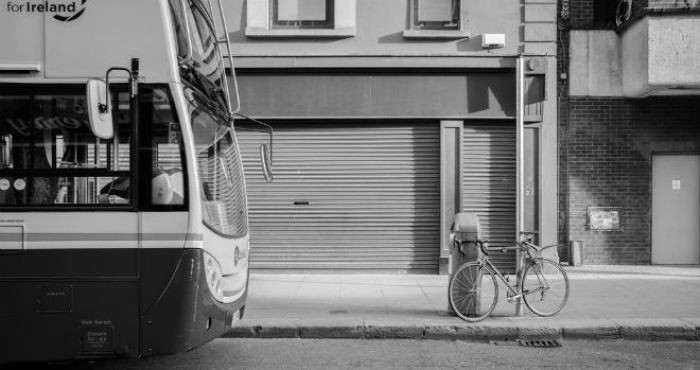 Remember it's been done in wetter cities

Cycling to school is healthy and removes morning gridlock